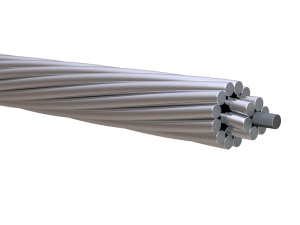 Aluminum conductor steel supported (ACSS) cable is used for overhead transmission lines. ACSS is designed to operate continuously at higher temperatures up to 250ᵒC without loss of strength, which allows for a significant increase in current carrying capacity over ACSR. ACSS is self-damping, sags less than ACSR under emergency electrical loadings, and its final sags are not affected by the long term creep of aluminum. These advantages make ACSS useful in new line applications where structures can be optimized due to the reduced conductor sag or where high emergency loads may be required; or in lines where Aeolian vibration is a problem. Existing lines can be re-conductored using ACSS to allow for increased current using the existing clearances and tensions.

The advantages make ACSS/AW especially useful in reconductoring applications requiring increased current with existing tensions and clearances, new line applications where structures can be economised because of reduced conductor sag, new line applications requiring high emergency loadings, and lines where aeolian vibration is a problem. ACSS/AW offers strength characteristics similar to ACSS, along with slightly greater ampacity and resistance to corrosion due to aluminium-cladding of the steel core wires.

The strandings available are identical to those listed in ASTM specification B232.

Few More thing you should know

What’s The Advantages of ACSS/AW Conductor?