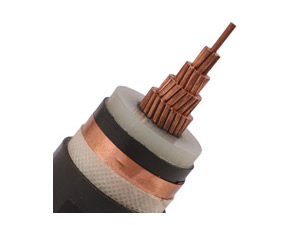 Medium voltage single core cable is suitable for use in power networks, in fixed installation outdoors in cable ducts or directly in the ground. Cable operational stability is enhanced because of very low dielectric loss factor, excellent insulation property of XLPE and firm bonding with conductor screen and insulation screen of semi-conductive material (extruded in one process), which makes it widely used in transformer stations, electric power plants and industrial plants.